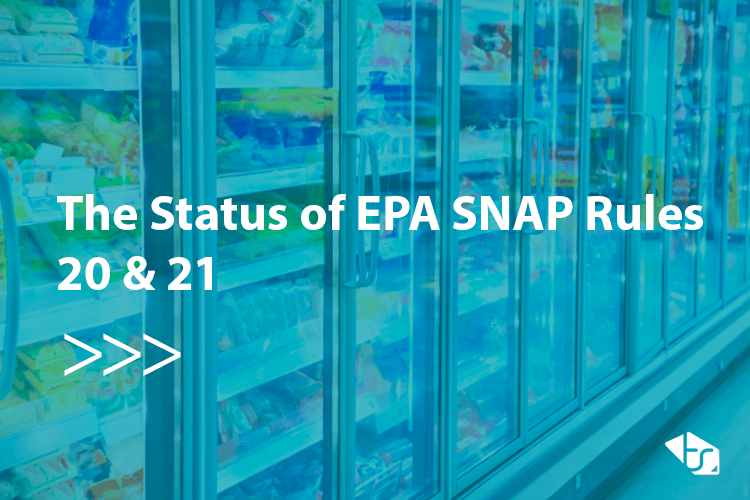 This Earth Day, as you’re examining your environmental footprint and risk assessment for global warming, prepare for the HFC refrigerant phasedown with Trakref by revisiting the status of SNAP Rules 20 and 21; these are two EPA rules that you should know about for environmental sustainability and ESG reporting, since they look to decrease our impact on the ozone layer.

Between the two, SNAP Rules 20 and 21, have had an interesting series of events—from publication to a lawsuit to a rulemaking back to a lawsuit and states adopting them in-between—over the past several years. The reason for such a twist and turn of events is precisely because of their HFC bans that apply to certain refrigeration and air-conditioning (new and retrofit) end-uses in production and import.

The 2017 Mexichem Fluor, Inc. v. EPA complicated these two rules and how their HFC bans apply to refrigerant tracking. Thus, this post provides an update on and revisits United States SNAP Rules 20 and 21. After all, you may be wondering: What bans still apply to my corporate sustainability initiatives and will be addressed in sustainability audit questions – and which ones don’t?

In SNAP Rules 20 and 21, various HFC refrigerants used in air conditioning systems were listed as unacceptable in various end-uses in the refrigeration and air-conditioning sectors.

SNAP Rule 20 has HFC prohibitions that apply to stationary refrigeration and air conditioners, specifically retail food refrigeration equipment (new and retrofit). The effective dates began in 2016 and went through 2020.

In 2017, the Mexichem Fluor, Inc., v. EPA decision dismissed the part of SNAP Rule 20 that banned HFCs in the various end uses. The EPA then published a guidance document in 2018 that effectively vacated the HFC bans in their entirety.

This went beyond the scope of the Mexichem decision.

Still following along? It gets more complicated. So, thus enters a counter lawsuit, which leads to an April 2020 court decision that finds that the 2018 EPA guidance document went too far.

In fact, the April 2020 court decision states that the Mexichem decision “did not vacate the HFC listings in the 2015 Rule in their entirety.”  It goes on to explain that the EPA’s statutory authority “extends only to regulating the initial switch” from ozone-depleting substances (e.g., CFCs & HCFCs) to HFC refrigerants.

Those who already made the change to HFCs cannot be required to replace again.

In December of 2020, the American Innovation and Manufacturing (AIM) Act of 2020 was enacted, which gives the U.S. EPA new authorities to address HFCs—namely, in three new regulatory programs:

The second new regulatory authority is what could possibly impact the EPA Significant New Alternatives Policy (SNAP) Program, including with Rules 20 & 21.

We talked about these possibilities in one of our recent Compliance Open Mic events. Recap in the video below.

As you may already know, amid these series of events from the past few years regarding SNAP Rules 20 & 21, numerous states—many a part of the U.S. Climate Alliance—adopted the HFC bans into their own state regulations, including California, Colorado, Connecticut, Maryland, New Jersey, New York, Vermont, Virginia, and Washington, among others.

We will be talking in more detail about SNAP Rules 20 & 21, what’s regulated, who’s affected, why, where, and when in our next LIVE Compliance Open Mic this Tuesday, April 27th 1:30pm ET. 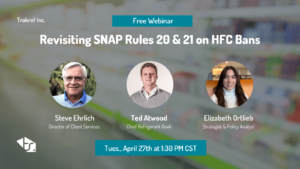 There’s a few spots left, so you are welcome to register now. As always, thanks for joining us. Right here on the Trakref blog.