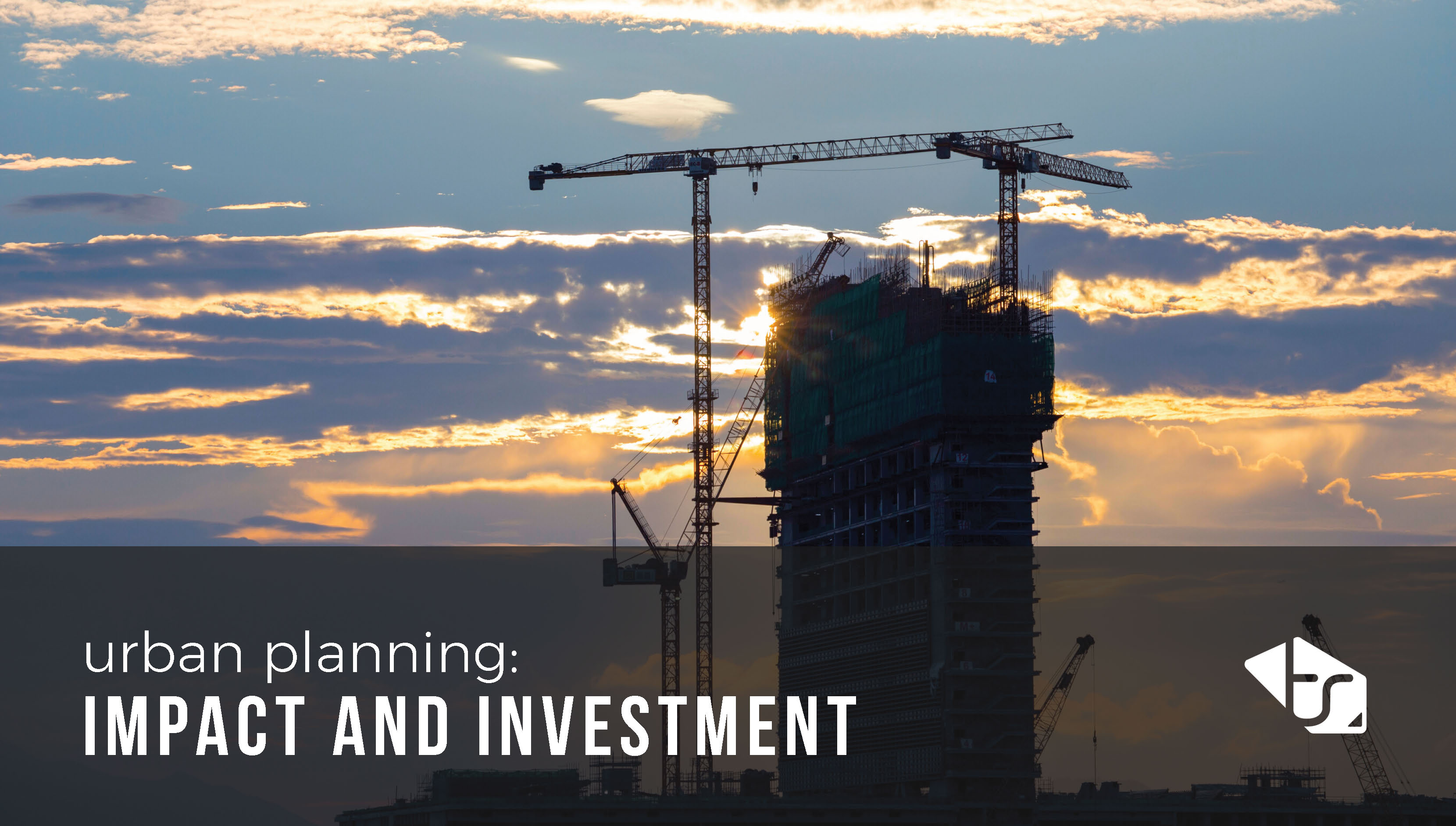 We all remember that iconic scene in the 1980’s classic, Ferries Bueller’s Day Off. Ferris, his girlfriend, Sloane, and his best friend, Cameron, have cut school and have made a pitstop at the Sears Tower. While on the observation level, Ferris encourages his friends to get up on the railing and place their heads against the glass to look out onto the city. Watching in formative years, it was difficult not to think that being able to look out through the windows of a giant glass skyscraper over a massive urban landscape like Chicago was a divine and transformative experience. The scene’s placement at the Sears Tower was particularly fitting, considering that adoption of the modern glass skyscraper began with the construction of Chicago’s skyline in the 1880s. 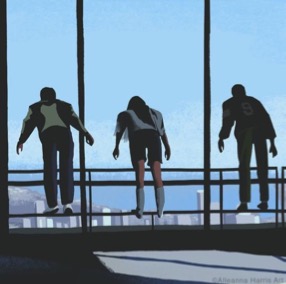 However, you would be forgiven if you had not considered the costly and downright destructive ramifications that these buildings, and what is required to make them inhabitable, have on the environment. Because why would you? However, as the rate and impact of devastating natural disasters and other dire societal consequences continue to grow, it is becoming increasingly important to line-item our lives and find improvements wherever possible.

Our security blankets to fight the heat have always been air conditioning and refrigeration. This is not going to change any time soon, as 2019 was the second hottest year in recorded human history. Accordingly, per the United Nations, buildings account for almost 40% of the world’s energy use. Without implementing aggressive efficiency standards, global energy demand from air conditioners is expected to triple over the next thirty years, requiring new electricity capacity equivalent to the combined current capacity of the US, EU and Japan. As they say in late-night infomercials, there has to be a better way! 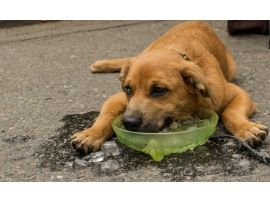 Mass-produced cooling systems generate an extraordinary amount of Hydrofluorocarbons (HFCs), pollutants that have become the fastest-growing source of greenhouse gas emissions in every country on Earth. Given that, you may be asking, “why would we stock our AC units and refrigerators with the fastest-growing source of global emissions?” Put simply, HFCs are the latest Band-Aid in a long series of Band-Aid’s designed to ever-so slightly improve our sources of cool.

HFCs have the current edge in refrigerant usage due to the fact that, while harmful to the climate, they do not technically destroy ozone. However, per a recent amendment the 1987 “Montreal Protocol on Substances that Deplete the Ozone Layer,” HFCs have been given a countdown clock for their destruction, with developed countries being given a directive to achieve an 85% reduction in HFC usage by 2036, causing world leaders to start thinking outside the box about HFC alternatives.

Unfortunately, the US has already hit a roadblock in this pursuit, via a Federal Appeals Court rejection of an EPA rule that would have required climate-friendly substitutes for HFCs. Despite this, California’s Air Resources Board has adopted a regulation that limits HFC use, which is expected to lead to the annual reduction of 3.4 million metric tons of CO2-equivalent by 2030. However, to fully understand the gravity of what we are up against, here are some cheery graphics: 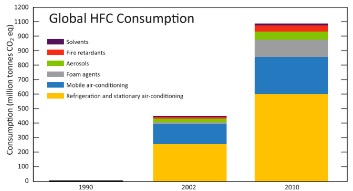 So what does all of this have to do with Ferris and the childhood wonder of an expansive glass skyline? Glad you asked. While glass buildings may have become the norm for cityscape construction, the fact remains that these translucent marvels pose extremely difficult problems for temperature control and, over time, history has shown that glass buildings simply carry too much environmentally-harmful baggage. Cosmetically alone, London’s “Walkie Talkie” building had to be fitted with additional shading after its reflective glass partially melted a nearby car (!!!). No one wants to be responsible for melting cars, but sleek construction is popular, and sometimes it seems insurmountable to square the expected environmental impact with wanting to create beautiful, glass-heavy architecture. But you can do something about that.

Firstly, it is important to note that, despite some designers adopting half-measures such as triple-pane glass panels, eco-friendly building practices are becoming impossible to ignore. Dense materials like stone, concrete, and earth have become celebrated for their particularly potent insular qualities, while Green Roofs – or, rooftop gardens – have also proven industrious, providing shade, removing atmospheric heat and reducing roof surface temperatures and the surrounding air up to 30–40°F lower than conventional roofs, reducing city-wide ambient temperatures by up to 5°F.

Building upon these innovations, many building owners and urban planners in China – presently accounting for 22% of installed cooling capacity worldwide – have embraced the insulative value of windows and solutions such as rooftop solar panels and facades paired with building-integrated water storage to provide cleaner and more flexible initiatives to meet cooling needs.

Japan’s “Cool Biz” campaign encourages simple lifestyle changes such as longer summer holidays, adding greenery to offices, allowing men to wear short sleeves and to forgo ties and jackets in summer months, as well as a greater reliance on blinds and curtains.

Help Us, Help You

Discussions of these supplementary tactics to increase your energy efficiency inevitably bring us back to those pesky HFCs contained in commercial refrigerant. A silent, but significant, issue that affects all buildings, continual release of refrigerants accounts for approximately 600 Million lbs. of leaked refrigerant per year; or, a 25% leak rate for all AC/refrigeration devices per building. The EPA recently acknowledged that, due to handling practices, eventually, 100% of all refrigerants leak, so they have asked States to step in and take on more responsibility to help reduce leaks.

By 2050, commercial building floor space is expected to reach approximately 126 billion square feet, a 36% increase from 2018. If we persist on living “Business As Usual,” then hundreds of millions of lbs. of even more refrigerants will leak, continuing to be a leading contributor in global temperature rise. To put that into perspective, refrigerants account for as much as 15% of all CO2 released into the atmosphere.

Even the grandest plans to control emissions are met with resistance and slow success, but making progress is easier than you think! You don’t need to redesign a building or own the Sears Tower to have an impact.

As stated above, the urban planning sector continues to engage in how best to manage this challenge.  Groups such as the Bloomberg Institute, Honeywell International and the EIA (Energy Information Administration) are investing in research to better understand the scale of refrigerant impacts, contributing to a web of resources at the local, state & federal level to support improved regulations, training and innovations needed to curb their refrigerant emissions. Additionally, most HVAC companies are already heavily invested in training, infrastructure to support refrigerant recycling, and recovery units, machines used to remove refrigerants from cooling equipment according to EPA standards.

For 25 years, Trakref has been investing in the resources needed to track, manage and maximize the value of every generation of refrigerant. When kept in their proper place, refrigerants are a terrific resource; they make living in warm climates possible and they make glass buildings comfortable, in addition to keeping food fresh, medicine safe and data moving. Refrigerant leaks increase energy usage, reduce equipment life and are costly to both your wallet and the bottom line. Our goal is to help clients achieve reduced leak rates, even in less regulated locations.

Make no mistake, we love glass buildings. They are beautiful and provide panoramic views that may otherwise be constricted by brick or stone. But the more glass buildings, the more air-conditioning and refrigeration required to keep them cool. The greater the glazing of the building, the greater the solar heat gain, as well as heat loss in cold weather, and concordantly, the usage of AC and emissions of HFCs. If we as a society would like to position ourselves away from the massive overuse of HFCs, we must first go to the source and fundamentally change the systems in place that require these practices. So break the glass ceiling on how we think about & manage refrigerants, and let Trakref be an important element of your company’s plan to reduce leaks, save money and save the planet.

For more information on global warming, download the NOAA/NASA Annual Global Analysis for 2019.