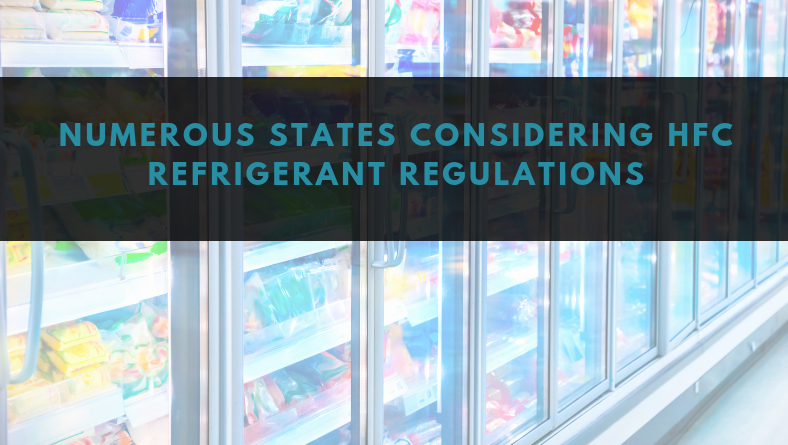 The future of HFC controls at the federal level is unclear. Here’s why:

One, the EPA SNAP Rule 20 HFC prohibitions were vacated earlier this year.

And two, the EPA recently proposed to revise the Section 608 refrigerant management regulations, where it would “rescind the leak repair and maintenance requirements” for HFCs.

Just when you thought things couldn’t get more complicated, numerous states have signaled that they may adopt their own HFC refrigerant regulations to compensate for the federal level activity.

These states include California, Connecticut, Maryland, and New York.

Let’s look at these initiatives with more detail.

On March 22, 2018, the California Air Resources Board (CARB) approved for adoption a proposed new HFC regulation: Prohibitions on Use of Certain Hydrofluorocarbons in Stationary Refrigeration and Foam End-Uses.

You can read more on this matter here, and you may also find our chart on the proposed prohibitions helpful.

Get My chart on California's Proposed HFC Reg

In Sept. 2018, the California passed SB 1013, the California Cooling Act, which adopts SNAP Rules 20 and 21 HFC prohibitions into state law and establishes an incentive program for low-GWP refrigeration.

In a press release from this Sept. 2018, Connecticut’s Governor Malloy announced that he “directed the Connecticut Department of Energy and Environmental Protection (DEEP) to develop regulations that will phase out the use of hydrofluorocarbons (HFCs).”

The press release goes on to say that the Connecticut DEEP “will begin the rulemaking process to develop regulations to adopt the 2015 and 2016 changes to the federal Significant New Alternatives Policy (SNAP) regarding hydrofluorocarbons.”

Note the reference here to not only the 2015 changes but also the 2016 changes to the federal Significant New Alternatives Policy (SNAP).

A press release, published by the Maryland Department of Environment in September, states,

“After efforts have stalled at the federal level, states have begun their own phase out initiatives. The Maryland Department of the Environment intends to develop regulations similar to those in development in California, which would phase out the use of certain HFCs in foam products and in refrigeration equipment in retail establishments, such as supermarkets.”

The New York Department of Environmental Conservation (DEC) is also considering its own HFC rulemaking that would adopt the “prohibitions on specific uses of HFCs in refrigerants, aerosol propellants, and foam-blowing agents that were previously finalized by the US Environmental Protection Agency in 2015 and 2016, under the Significant New Alternatives Program.”

You can find the pre-proposal stakeholder draft for the rulemaking here.

You might be interested to know that just today, on Nov. 14, 2018, the New York DEC hosted a pre-proposal webinar on a HFC rulemaking. There will be another such webinar later in the month on Nov. 28, 2018, and you can find more details on that here.

All of these states are a part of the U.S. Climate Alliance, which has an initiative for short-lived climate pollutants (SLCPs).

With these states considering HFC refrigerant regulations, the HVAC/R landscape continues to complicate.